The stuff nobody talks about!

Asking google the meaning of the word ‘autism’ sends you down a rabbit hole of information relevant..some…avoidable! So, here is asking you a question instead.

What is the first word that comes to mind when you hear the phrase “Autism” or “Autism Spectrum Disorder?”

Here is a new word that might best describe the phenomenon. A different brain.  ASD is nothing but a condition whose origin is unknown, but has one compelling piece of evidence – a differently structured brain. This is obviously something not visible to the naked eye, unlike the other symptoms and adjectives we have used to describe autism. A dive into neuroscience can help us understand this fascinating phenomenon that touches all our lives.

Many studies (Our included! If you haven’t read it, follow the link in the reference section and deep deep into some scientific facts and results of a study we conducted!) have shown that parents and caregivers of children with ASD often believe that their child has a special skill, that their child can be taught many things. Now we aren’t saying this is not true. We 100% believe that individuals with ASD have a LOT to learn and it is our job to enable them to learn and understand the world around them.

However, there are certain skills that they may never totally internalize, even though they may learn the skill itself.  It is like smiling. The child can smile on instruction, but that is not a reflection of how he feels inside, and the smile doesn’t reach his eyes or necessarily express the emotion of joy. That is the difference we are attempting to bring out.

That brings us to the much-touted social skills aspect. There are curriculums, there are manuals on how to cultivate the skills required for a child on the spectrum to get along in a dyad or a group setting, with the ultimate goal being integrating him into a classroom set up where he may have to share not just his space but also material with peers. From being able to greet someone to responding appropriately to a greeting, to knowing how much space to maintain when speaking to someone and of course, taking turns, a skill that makes the cut for almost every early intervention program. The important question to ask ourselves as clinicians, interventionists and parents is “will they learn the skill and learn to enjoy the resulting interactions”. Will spending hours teaching them to take turns to play Bingo or to slot the coins, result in them actually enjoying a game with peers?

According to Neuroscience, chances are that with intensive intervention geared towards these skills, they will learn how to take turns, but doing so without actually enjoying the game itself, it’s like being taught to drive a car only to declare that you will never ever sit behind the wheel. Which is perfectly acceptable, but makes you ponder over the hours of intervention that prepared you for this very skill.

Taking a look at science and what is already out there printed and published in the widely accepted journal, people with ASD are known to have abnormalities in the Broca’s area of the brain and Wernicke’s area, which then may go on to explain the deficits in social language and attention, while abnormalities present in other parts of the brain such as the PFC and amygdala might cause impairments in social behaviors, according to a study conducted by Ha et.al (2015) published in the journal of experimental neurobiology.

Does this explain the inherent difficulties they face? And to what extent can the best possible interventions bridge the gap?

A study conducted by the Stanford University School of Medicine in 2018, indicated abnormalities in brain structure that documented the deficit in a crucial reward circuit called the mesolimbic reward pathway.  The degree of abnormality in the pathway depicts the extent to which their social abilities are impacted, take a look at the picture: 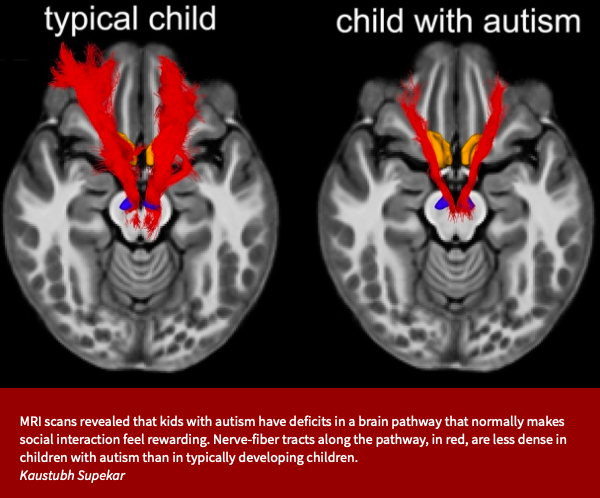 Does this explain the behavioral phenomenon of what we’d call a lack of interest in socializing with peers or stunted social responding?

A little closer to home, we worked with some of the high functioning autistic kids on the ability to express concern when another person is in visible pain or complains of pain. The results were interesting, to say the least. Without a doubt, they clearly mimed the lines taught to them, and applied them in the correct situation but what stood out was the lack of accompanying empathy and the gestures that indicate a person’s willingness to assist and help someone who has suffered a fall or is in pain.

Looking back, this experiment is possibly a reflection of the link between the difference in the brain, neural circuits and the seemingly odd behavior of someone on the spectrum!

Another fascinating dimension of ASD is the existence of so-called savant skills or special abilities.

This is a question that is asked of us at every consultation, every parent with a child with ASD or just about every friend of ours who knows that we work with children on the spectrum, a conversation usually goes like this..

“Are they brilliant at math?”

“Can they do puzzles upside down?”

“They must be having some special skill!”

“I am sure my child has a special ability, but I haven’t been able to identify it yet”

“How can I find his special talent’?

Some of the better known research pioneered by Dr. V.S.Ramachandran, the world renowned neuroscientist, indicates that children with ASD are less concept driven than a typically developing child, which could imply that they have an incredible ability to pick up something a neurotypical cannot or glances over without much thought.

Savant skills are displayed by 10% of the autistic population, and this can be seen in their ability to recall trivial and sometimes meaningless details (like a train schedule) leaving the big picture out of their perspective. Going back to the 10% displaying savant abilities, this contests the theory that everyone with autism is gifted and is something to keep in mind, as educators and parents. They are wonderful children, but to “expect” them to display a skill set par excellence becomes an unfair stressor both on the parent and the child themselves.

A study conducted by Snyder and Mitchell (1998) reveals that the truth is in the details. The stimulus that you and I may be looking at and picking up as the most significant detail is something a child on the spectrum may not necessarily even notice, while some other aspect of the stimulus takes control, making them seem hyper focused and almost gifted in a particular area. Show me a picture of a train and I guarantee you I will notice the name printed and the color, show it to a child on the spectrum and you’ll be surprised at the details that catch their eye.

Research continues to show that when the child develops some amount of language ability with intensive intervention, the savant skills drop off and almost disappears.

So moving to the more important aspect, outcomes! What are the implications of these research outcomes on the actual process of intervention? Possibly, a lot of the skilling in the area of socialization may remain symbolic, at best, bringing a semblance of access to other people and to socially available reinforcements, whether or not the person with ASD actually enjoys or looks forward to the process. But what stands out the most is skilling them in areas that are mandated for them to master in order to live a fulfilling life, everything from safety, to privacy, to taking care of themselves in terms of hygiene, feeding and toileting, even if for some it might mean living under a sheltered roof for their lifetimes, the dignity of being able to live a life where they can care for their own personal needs is one that interventionists and parents need to gear them towards.  Sitting on the other side of the table (literally), it can be sometimes challenging to watch a parent enrol their child with autism into a school program, without understanding the implication of lost years of evidence based intervention, watching them allow a repertoire of behaviors to build up before seeking professional help, all this while the child is attending a program that teaches skills that he may never utilize in real life.

Want to know how we feel about that? Meme below. For your eyes only. 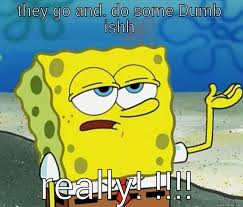 But on a more serious note, does all this research and this long blog post really mean children with autism cannot go to school? Of course not, they can go to school but the question to ask ourselves is this, is what they learn at school gearing them towards a life of independence? Possibly not. After all, it isn’t your educational degree or the marks you obtain that pays your bills, it is the soft skills you acquire along the way that lets you keep a job and better yet gain promotions at your job and give you the capacity to earn recognition and money. It’s not just the fact that you went to school or college. Something to keep in mind, the next time you hear advice on schooling children on the spectrum!

Does all this research mean children with ASD cannot learn to be social? Of course not. Again, with some children on the autism spectrum, we see the intent to be around people, the desire to interact, but this is with some and not all children on the spectrum. The question we want to ask ourselves again is this, “do they enjoy socializing”.

What does this mean for all of us?